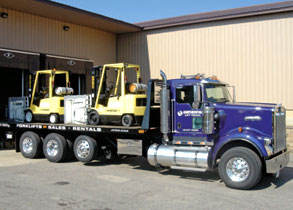 Everyone knows about the confusion that resulted following the catastrophic landfall of Hurricanes Katrina and Rita last year. Luckily for the distribution center of a large home improvement retail chain, Continental Lift Truck Corporation (Jordan, MN) was able to provide a little bit of clarity.

The distribution center, located in Mount Vernon, Texas, had previously ordered 12 LP lift trucks with four-way hydraulics and 48 x 48 carton clamp attachments from its normal distributor, the Crown Lift Trucks factory store in Grand Prairie, Texas. Once the hurricane hit, however, the trucks that were to fill out the DC order were shipped out to the recovery zones. The customer’s national account rep called John Crouch, Crown rental and used manager at the Grand Prairie store, but he did not have anything in stock. Crouch checked with a few other branches, but all available equipment was sent to help with the cleanup effort
Good thing Crouch had a pre-established five-year relationship with Continental Lift Truck, a wholesaler who accepts trades for older Crown equipment and provides some off-brand equipment. This time, Continental really came through, despite being located almost 1,000 miles away.

Continental keeps a fleet of about 150 short-term rental trucks, with varying capacities and specs. “We happened to have what they needed with the attachments here in stock. It’s not uncommon for us to have what others may consider an unusual order,” says Mike Sibulkin, Continental’s vice president. “Our rental fleet is full of specialty equipment that other people don’t normally deal with.” Continental Rental Coordinator Duc Tran contacted the end-user to let them know what was coming and when to expect it, so there were no surprises when the equipment was delivered. Within a week, three truckloads of forklifts were shipped directly from Continental’s headquarters in Minnesota to the customer’s distribution center in Texas.

The trucks came from a mixture of manufacturers, including Toyota, Hyster and Nissan. Each truck was fitted with a 48 in. x 48 in. carton clamp from Cascade Corporation. “We lucked out to find that many that late in the game with the attachments,” Crouch says. Crown mechanics serviced the account during the four-month rental period, from September 2005 into January 2006, after which they were sent back to Continental. The deal exceeded $75,000. “The package worked out great for everybody,” Crouch adds. “Continental helped us take care of our customer to get them through the peak caused by the hurricane.” 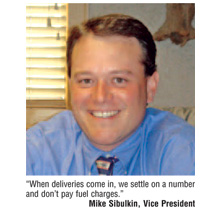 BE AWARE OF THE MARKET

Although trips to the gas station are expensive, not all distributors are experiencing dramatic spikes in costs, changes to their bottom line or price increases for customers. However, witnessing others in the industry experience an increase in operating costs due to the rising cost of fuel has been enough for many to become conscious of inevitable trickle-down effects, causing slight changes in the way some businesses function.

A wholesaler like Mike Sibulkin, vice president of Continental Lift Truck Corporation (Jordan, MN), doesn’t have many service vehicles on the road. Sibulkin has not been affected very much by the increase in fuel prices other than a few surcharges on the materials he receives. “We have not implemented a surcharge ourselves, but we are not running 20 or 30 service vans. If we were, we probably would have a charge,” Sibulkin says.